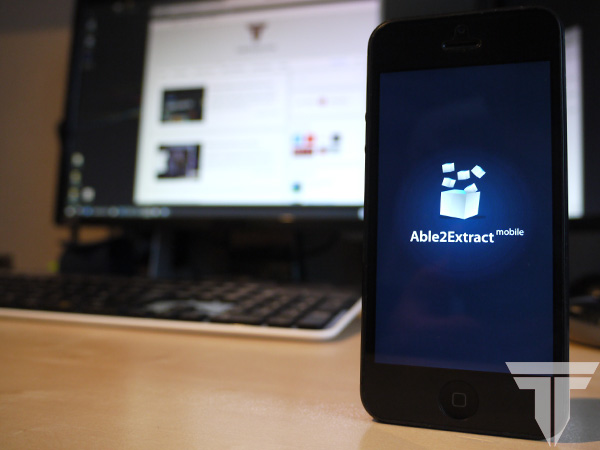 Read and Convert PDF’s on your iPhone or on Android

PDF’s are a standard format. If you ever try to do work online you should expect to use PDF documents on a daily basis. Recently Investintech contacted me asking me to take a look at their iPhone app they have made for managing and converting PDF’s. They asked me to share some feedback I have for the app, and asked me to do it by way of a post on this site.

The app functions more of an extension than an actual app. Whenever you open a PDF from any other app, you will get the option to import it into Able2Extract. From there you can store and read multiple PDF’s, share them and also convert them to word documents. The app sounds great, and I was looking forward to using it, but the app has a number of problems.

To start off with the app really needs an overhaul in regards to its appearance. It’s not the prettiest app to look at, and the advertisements along the bottom also don’t help. It’s not the advertising I disagree with (advertisements can be very good at times) but when it is coupled with a seemingly poor looking app, it pulls down the impression the app gives to first time users. The App could also do with some work on its User Experience. Some buttons lack labels, a number of the icons are either misleading or seemingly unclear.

Another issue is the all conversions happen on their servers, meaning you have to upload your file and then download it again after having finished converting. This has to be done to cut down on the amount of recourses the app consumes, so really it can be seen as a good thing. Progress indicators would also be nice for converting, as currently its rather blind as to how long your conversion is going to take. I am sure that the App will be updated shortly to address some if not all of these issues.

Despite these issues the app does function. It does store and open PDF’s and will convert them to editable formats to the best that can be expected. Advanced PDF’s which use a large variety of layouts and images around the page will not convert accurately, but that has been the same for just about any PDF converter I have used over the years. It’s a handy app to have, and I am going to use it whenever I need to convert PDF’s on my iPhone.